When travelling around Vietnam, you will easily catch a glimpse of local people eating banh mi, or baguette, in the streets in every region of the country. Banh mi, made from wheat, was first introduced in Vietnam by French in the colonial period. And then vendors made various adjustments to satisfy the taste of local customers. So, today it has been selected as one of the best street food in the country by a lot of tourists and enjoying banh mi is a must-do in their list. We can say that the French created the baguette. But Vietnamese themselves make it become famous all over the world. Slender and about 20cm in length, banh mi is crispy and soft inside. When taking a bite of it, you can feel its own smell, especially in the cold weather in the winter. What makes the street food so special that Vietnamese, and even lots of foreign visitors, eat at least one per day?

Many options for their meals Street vendors in the north, central and south of Vietnam have continuously created banh mi with several fillings in combination with pickled carrots, cucumber, herbs, mayonnaise, and chili. People have many choices of banh mi for their meal. There are such as banh mi cha lua (pork roll), banh mi trung (fried eggs) and banh mi pate (pate). They not only use local ingredients but also add Western ones to their banh mi including ham, cheese, and bacon. That’s why you can see the locals eat banh mi every day. Bcause they can have banh mi with various fillings for their breakfast in the whole week.

Banh mi also can be found in many regions of Vietnam. And each one has been made in its own way with typical flavour. In Hanoi, several makers have recently combined banh mi with Westernized fillings to meet demands of young people. Two of the most popular kinds are banh mi nem khoai and banh mi chao. The first one includes fermented pork roll, French fries, mayonnaise, chili and some slices of cucumbe. While the latter, Vietnamese-styled beefsteak, we serve in a frying pan with pate, omelette, sausage and tomato sauce. 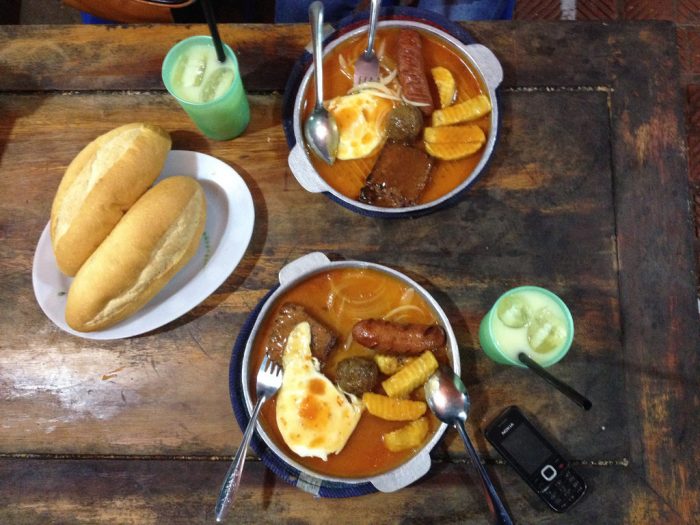 People in the coastal city of Nha Trang are addicted to banh mi cha ca. And it includes grilled chopped fish, vegetables, and chili. While the touristy city of Da Lat is well known for banh mi xiu mai. With xiu mai, people will dip banh mi in a broth full of pork meatballs and scattered onions.

Besides, lots of types of vegetarian banh mi have been developed to meet higher demands of local vegans. They are often filled with tofu, sliced salmon or tuna.

Easy to buy one on streets at a low price Banh mi is a top choice for workaholics, who do not have enough time to cook. Vendors pull their banh mi carts through streets or some carry baskets with full of baguettes on their heads. Several ride their bikes with banh mi on the back through small valleys to sell for people right at their houses. Many of them also sell banh mi at schools and offices and become popular spots for students and officers because they don’t need to go far to have one. Moreover, it does not take a long time to make a banh mi, so stores and carts are very convenient for them.

The fillings of banh mi often include meat and vegetables that will help people have enough energy to work or study in the day. 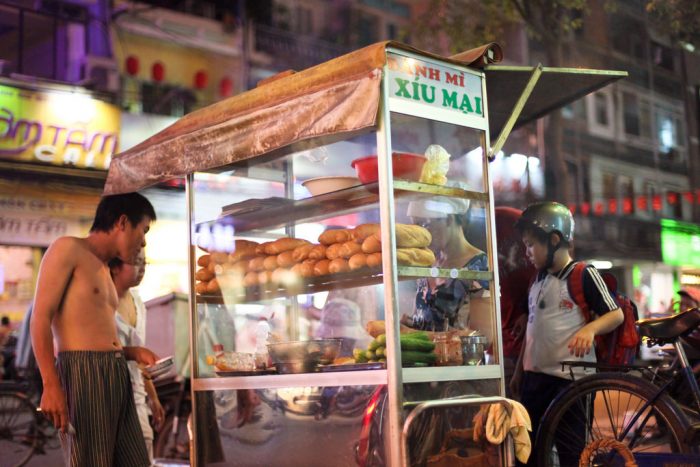 There are many stores and street vendors offering various types of banh mi at a low price. One banh mi on average costs around 15,000-20,000 dong. While a bowl of pho or hu tieu can be charged around 30,000-35,000 dong. Therefore, having a banh mi can save you much money.

Banh mi is one of the favourite dishes in Vietnam. So you will not be surprised if seeing so many local people enjoying the food in the streets. Try one when you are in the country or you will miss your chance to taste great food.